Although there has been a great deal of discussion on the likely impact of AI on the legal profession, the debate is lagging significantly behind that in other professions. The healthcare, insurance and banking industries, for instance, have already developed mature frameworks for evaluating AI and are actively considering change management required to move from the current framework towards what the future will demand. Besides paying attention to machine learning applications in due diligence and discovery, the legal sector is far from this point.

This is a puzzling also a bit disconcerting, given how important legal AI systems will certainly be in advising clients in the cyber-physical world that is [very rapidly] emerging. Legal needs in a few years will likely be radically different to what they are today – but today’s law firms seem fixated on how AI will likely impact today’s client needs within today’s legal frameworks and today’s law firm structures and systems.

A current article in MIT’s Sloan Management Review reports on a global survey of 3,000 executives and in-depth interviews with 30 technology experts, in which roughly 20% of companies surveyed have incorporated AI into some processes and roughly 5% have done so extensively. Three quarters of executives surveyed believed that AI will allow their companies to move into new businesses and 85% believed that it will yield sustained competitive advantage.

Why is the legal profession lagging? I would speculate that the reasons might include that:

The above concerns may have some validity but in my opinion, they miss the point. That is, that in a world of cyber-physical systems, AI, ‘big data’ the ‘internet of things’ (collectively what the World Economic Forum refers to as the Fourth Industrial Revolution) lawyers will simply not be able to advise clients in the same way that they have before, or do today. A law firm’s “know-how” and the deep knowledge and experience of its lawyers may not deliver the same competitive advantage that it does today, in a future world where data is exponentially more complex, voluminous and inter-connected. Most client relationships may also become driven primarily by technology. How then will law firms compete?

As a parallel, consider the motor industry. As an article in the current Harvard Business Review points out, most of the value proposition projected by motor manufacturers (and a great deal of their competitive advantage) revolves around the driver experience. The display panel, the comfort of the seating, the prestige of driving a certain kind of car and the size of the engine and other mechanical attributes appeal, in the first instance, to the person behind the wheel. Consider how that changes in driverless cars. Not only does the driver no longer exist, but the primary sources of competitive advantage shift to the quality of the networks, applications and data that navigate the vehicle, that prevent accidents and that enhance the journey of the passengers. These are all owned and controlled by software and network companies – not the motor manufacturers.

Philip Wood, in his excellent book The Fall of the Priests and the Rise of the Lawyers, estimates that there may be 100 million pages of law in existence, today. The invention of the offset lithographic printer in the late 19th century was probably a significant trigger for the inflection point in the exponential growth curve. It may very easily be that the advent of the 4th Industrial Revolution triggers another inflection point, propelling the amount of law with which businesses and societies have to comply into the tens or hundreds of billions of pages. Well beyond the level where human legal brains can cope without serious AI capabilities to support them. In such a world, law will likely become inseparable from other kinds of knowledge, at least in the way that businesses need to deal with it. It may even be convincingly argued that we are already at that point. The question then becomes whether firms that practice only law can even remain viable, except in very narrow, specialised applications. Competitive advantage may pass to multi-disciplinary advisory firms.

In thinking how the change might unfold, it is helpful to consider how AI is likely to impact: 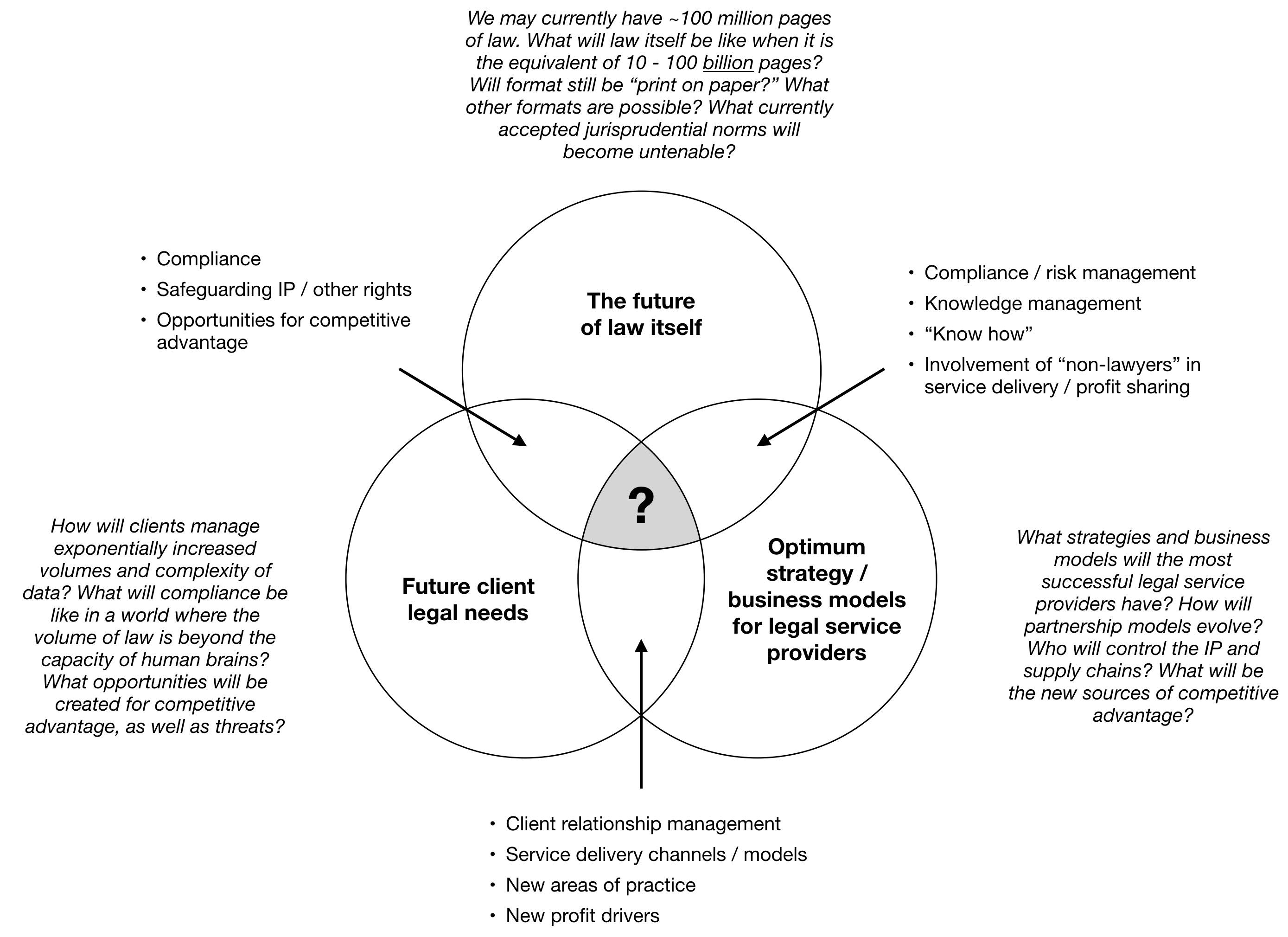 In the world of cyber-physical systems, AI, ‘big data’ the ‘internet of things,’ lawyers will not be able to advise clients in the same way that they do today

Substantive legal knowledge is required as much as technological knowledge, to develop the AI platforms that will enable tomorrow’s lawyers to adequately advise their client’s – in exactly the same way as this has been the case with substantive medical and financial knowledge.

Postscript: On November 17, 2017, I will be co-chairing an International Bar Association conference in London titled “Building the Law Firm of the Future.” It will be exploring these topics in greater details and, as you can see from the programme, features an impressive faculty. If AI and the law is a subject that interests you, I’d encourage you to consider attending. The event is already 60% sold out.