After Covid-19, tensions that pre-existed the pandemic will become intolerable

We are now well into the ‘response’ phase of the coronavirus pandemic and most law firms appear to have weathered the initial storm. IT teams have served their firms with distinction in setting up remote working systems. Frank conversations have taken place across partnerships about what is needed to ensure their firms’ survival. Some firms have suspended partner drawings, reduced salaries and are furloughing staff under the UK government’s Coronavirus Job Retention Scheme and similar schemes in other jurisdictions.

It remains unclear how long the pandemic will last.
The coronavirus pandemics of 2009, 1968 and 1956 each consisted of a single wave, killing roughly 300,000, one million and two million people respectively. The ‘Spanish Flu’ epidemic of 1918-1920, on the other hand, came in three waves, with the majority of deaths being concentrated in the second wave during three brutal months in the Autumn of 1918, just prior to the end of the First World War.
If we assume a positive scenario then we can expect the lockdown in this case to ease relatively soon (a month or two more, perhaps less) and for businesses to be able to commence operations again.
Given the complexities involved in reversing such a ‘sudden economic stop’ though, unanticipated consequences are a virtual certainty. Recovery is unlikely to be as simple as that from a crisis such as a cyberattack or a fire or other natural disaster.
Based upon research into human responses to change, especially following a crisis, five phases of recovery can be identified, as can be seen from the graphic below.
The first phase, namely the pandemic itself and its countermeasures, is already well under way. People have moved through the initial shock and disbelief, eased by how well remote work systems are working. The other four phases will follow once the medical emergency ends and the focus moves to restarting economies. 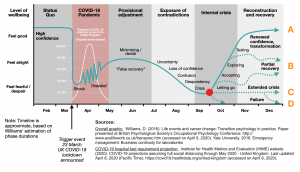 The second phase will commence at the point where people return to their offices. After the lockdown, most will be happy to do so. Life and work will begin to feel normal again, to the great relief of most. In time, some might begin to intellectually minimise the effects of the crisis and deny their permanence.
Peoples’ mindsets and skills will have been permanently changed, though.
Several months of being able to work remotely, with no commute and ample time spent with family, will have shifted perceptions about work-life balance.
The impact of the countermeasures on industries that we took for granted before (for instance the airline, hospitality, restaurant and retail sectors) might well have radically changed the economic landscape.
Tensions and contradictions that existed before will surface again, but with peoples’ tolerance to accept them likely much reduced compared to before the pandemic.
These resurgent tensions are as likely in relationships between clients and their lawyers (for instance around gaps in expectation) as they are within law firms.
We are already hearing of clients requesting very sharp reductions in fee, based on the effects of the virus.
Client personnel too have been working from home. Catalysed by the increased demand of the past few months, development of tools that enhance remote work even further are accelerating (cue VR-enabled videoconferencing, for instance).

During this phase, firms will become aware of issues that cannot be simply papered over. Some of these might even fundamentally impact their strategies and business models.

Will people, having tasted working from home for an extended period, continue to happily stand on overcrowded trains commuting into London and endure close contact with total strangers on the Tube?

Will metrics with which performance was measured, used to determine compensation, be the same in the world after COVID-19 as they were before?

In many respects, digital transformation has been propelled forward by three to five years — in mere weeks. In that respect, we are in the year 2025. How do we reconcile that with those elements of the business that still languish in 2020? At the very least, recalibration of strategies and business models will be required.

If these tensions and contradictions are allowed to escalate and are not adequately addressed, people will lose confidence and engagement with the firm will deteriorate. Eventually, this will trigger the fourth stage.

It is frequently said that the word ‘crisis’ in Chinese consists of a combination of ‘danger’ and ‘opportunity’. Elegant though this may be from a motivational perspective, it is a slight misquote. The Chinese term for crisis is more accurately translated as ‘danger at a particular juncture’ – ie a point in events or time.

This translation also better describes this kind of crisis.

Inexorably triggered by untenable tensions and contradictions that are fundamental to the firm’s business model, the internal crisis is not something that can be glibly reframed as an opportunity and then sidestepped.

The actions of the firm’s leadership will directly determine whether the firm goes on to thrive, merely survive (and in due course probably end up on the receiving end of an unwanted merger) or even fail.

It might be that the crisis is catalysed by client demands for value that a business model predicated almost entirely upon billable hours cannot efficiently deliver.

The trigger might be client demands for price points for certain services that can only be profitably reached if technology is used in radically different ways – ways that law firm  partners find deeply uncomfortable.

In markets that prohibit fee sharing between attorneys and other professionals, it might be around getting multidisciplinary services to work in ways that clients find satisfactory.

It might be around making remote work as effective as in-office work. Many other equally existential possibilities exist.

In any event, it is highly likely that the internal crisis will be triggered not by anything to do with the COVID-19 virus directly, but instead by tensions that pre-existed the pandemic and have now become intolerable.

For those firms that survive the internal crisis, the final phase, if successfully negotiated leads to business transformation and renewed confidence by stakeholders, both internal and external.

This phase progresses through letting go of whatever it was that caused the crisis and accepting the need to find a fundamentally new way. Firms that are unable to achieve this are doomed to a perpetual state of crisis, or a defensive merger, or failure.

The intent of a model such as this is never to slavishly articulate a fixed process that will apply in all cases, but to help understand the drivers in play and how they might unfold. Each law firm’s journey through recovery to the COVID-19 pandemic will be unique but common themes are very likely.

In conclusion, the most important points to remember are firstly, that the period immediately following the end of the pandemic might feel like a return to normality, but fault lines will have opened that make it almost certainly not so.

Secondly, Fault lines will manifest eventually as visible tensions and contractions, most of which will likely have pre-existed the pandemic but have become intolerable.

Thirdly, depending on how well the firm’s leadership handles the resultant crisis, the firm will go on to transformation and success, partial recovery, perpetuation of the crisis or failure.

Lastly, the ultimate outcome will likely be based far more on vision, courage and sound change management than on technical difficulty of the solution required.

This article was originally published in The Global Legal Post on 29 April 2020.